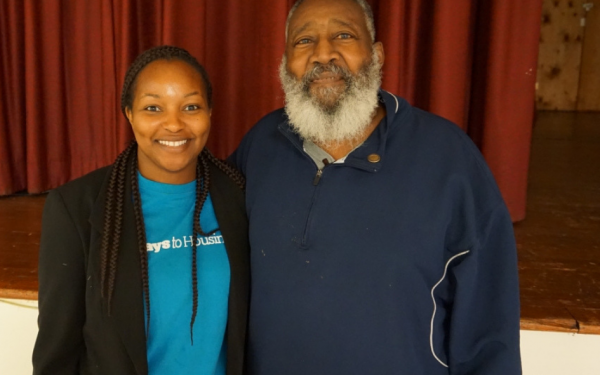 Terry has a quiet confidence and a smile that draws you in. He speaks proudly of his lifelong residence in DC, his service in the Marine Corps, and his wife, 3 children, and 7 grandchildren. Terry is an overwhelmingly positive person, in a world where optimism is all too rare. Meeting him, you’d never guess that at one point in his life, Terry had lost everything, including his health and his home.However, while he experienced homelessness, Terry never lost his hope. He just needed to meet the right people who could help him regain what he needed most: a home of his own.

When you talk to Terry about his past, he smiles and tells you matter-of-factly about his accomplishments in life. Things like his time in technical school in the 70s, learning how to use computers. Landing a prestigious job with a technology startup company in Rockville, Maryland. How his work and experience there attracted the attention of the military who offered him a contract to work on cutting edge computer technology.  Jumping at the chance, Terry joined the Marine Corps. However, due to medical issues that were beyond his control, Terry was forced to set this opportunity aside, being honorably discharged by the Marine Corps in the late 70s after only a year of service. Heartbroken, but ever-positive in his outlook, Terry used his experience to start a long career with computers across many different fields, eventually retiring from the Postal Service in the early 2000s.

Terry thought he was prepared, but the money from his retirement was not enough to be able to make ends meet. His bank offered him a very attractive offer to refinance, but the “too good to be true” offer that they made, really was. During the height of the housing crisis in 2008, Terry, like so many others at the time, lost his home. The strain of the experience led to he and his wife separating. While she had family to stay with, he had nowhere to go. Terry floated from couch to couch, staying with friends and even his children at certain points. However, they too were struggling just to get by. Terry’s pride made him feel like a burden. He took his chances on his own, eventually landing in a shelter for homeless military veterans in DC. At the same time, his health began to rapidly decline, leading to several hospitalizations. Terry stayed at the shelter for over a year, trying to find the help he needed, but he was constantly frustrated and disappointed. Still, though, he refused to give up.

One day, Terry was explaining his situation to a staff member at a Veteran’s Administration resource center for people experiencing homelessness. David, a member of the Pathways to Housing DC Veterans Housing First team, overheard the conversation. He approached Terry and told him “I can help you.” Terry said those four words were the absolute best thing he has ever heard. David and the rest of the team worked with Terry to get all the documentation he needed. Within two months, Terry had an apartment and was ready to move in. However, he was still struggling with his health. After hearing his apartment was ready, Terry was hospitalized the very next day. He stayed in the hospital for over a month where he was diagnosed with Chronic Kidney Disease and told that he would have to be on dialysis for the rest of his life. He was devastated, but he had the support of the Veterans Housing First Team who visited him in the hospital. They reassured him that when he got out, his apartment would still be waiting. It was such a relief to Terry to know that he had a home to go back to and people who cared.

Since moving into his home six years ago, Terry has reconciled with his wife and reconnected with his children and grandchildren who come over for dinner and the holidays. His Pathways team visits him regularly, helping Terry arrange transportation for his 3-days-a-week dialysis appointments. His health has improved dramatically and he hasn’t been hospitalized in years. Terry had a mantra while he was experiencing homelessness – “This too shall pass.” With a home and the support of the team at Pathways, his experience with homelessness has truly passed forever.