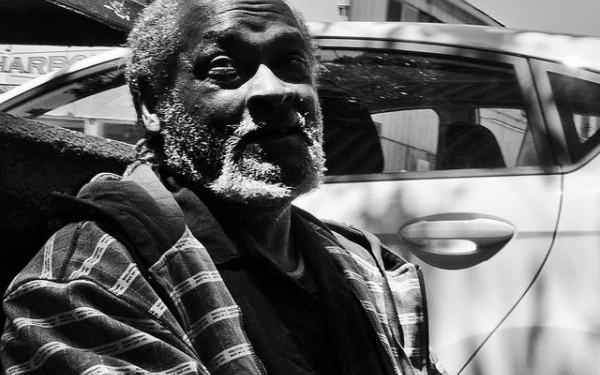 Each morning, thousands of people fill the sidewalks of Downtown DC, moving toward destinations as varied as their own individual lives. Up until recently, looking through the crowds, one could catch a glimpse of a cardboard sign just to the side of the doorway of a Starbucks. If you looked closer, you could see the words on the sign, written with care: “Homeless lives matter, blessed are the poor for theirs is the Kingdom of Heaven.” Looking closer still, you could see the small frame of the man holding the sign, a look on his face that was defiant, but at the same time welcoming of any who would be willing to stop and talk to him.

It could be about the sign or religion, politics or why he was without a home.  It could be about the unwashed clothes on his back or the weather for all Joel cared, as long as there was conversation to be had. While Joel was approachable and always willing to talk, his life experiences combined with his undiagnosed bipolar disorder had led him to be very untrusting of people. This unwillingness to trust was a huge obstacle that the DowntownDC Outreach team had to work hard to overcome when they first met him.

Thankfully, Joel was easier to find than most people experiencing homelessness. When not drinking coffee inside his favorite Starbucks, Joel was always outside with his sign, pulling passersby into conversation. Pathways Outreach staff members got to know Joel, spending many hours learning about his health and situation.

Outreach specialist Mercedes Dones, in particular, connected with Joel. Through consistent care, Mercedes was able to build a rapport with Joel that went beyond the casual conversation that he was used to. Mercedes worked with Joel to set and accomplish goals for himself, which included securing a reliable income and getting the documents he needed to move into a home of his own.

Trusting in Mercedes, Joel told her he wanted to start addressing his mental health needs. Mercedes introduced Joel to one of Pathways to Housing DC’s mental health teams, where he was able to receive the additional support he needed. Joel also worked with Mercedes to accomplish his ultimate goal of finding a permanent place to call home.

After only two weeks, Joel found an apartment that he loved and was ready to move in! With keys in hand and a giant smile on his face, Joel repeatedly thanked Mercedes and the team for their patience and for “being true to their word”.Since moving in, Joel is working on new goals that are important to him, like connecting with the new community that he has moved into. While he no longer has his cardboard sign, Joel still has plenty of people to talk to. Only this time they aren’t strangers passing by on the street. They’re his friends and neighbors.