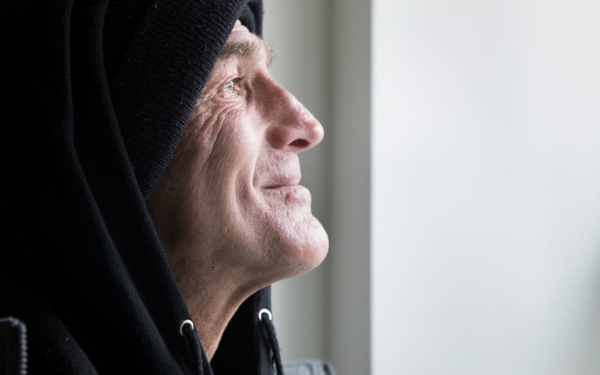 David was homeless in and around Bethesda for almost 30 years, living in the woods for most of that time.Constantly on the move, David survived by panhandling, dumpster diving, and selling scrap metal. For the last 5 years, David had called a small patch of trees between the Beltway and New Hampshire Avenue home – more out of necessity than want. Shortly after settling there, David’s untreated cataracts, that he had been battling for years, finally caught up with him. It didn’t happen all at once, but in a matter of a few weeks, David had completely lost his eyesight. While the “swamp-hole”, as David referred to it, constantly flooded and made his life miserable, it was all that he had. Incredibly, David was able to develop a routine and feel his way, mostly by memory, to the panhandling and dumpster-diving spots that he knew before going blind. Going somewhere new or even reaching out for help beyond his panhandling was impossible for him. He had accepted that this was his life now. He was just trying to survive.

Last year, during a particularly cold winter night, a homeless outreach worker named Katie encountered David while doing hypothermia wellness checks in the area. Having lived on the streets for many years coping with addiction and mental health challenges, the added complication of his blindness had put David in a defensive state. It took many months for Katie to build a relationship of trust with David. During this time, Katie began to realize the full extent of the health challenges that David faced. She connected David with Mary, a case manager at Pathways to Housing, an organization that Katie knew was equipped for his very serious physical and mental health needs. Through Katie, Mary began building her own relationship with David, convincing him that he deserved better and that his situation could and would get better.

Mary immediately went to work to find David housing and begin addressing his health, starting with his cataracts. Mary took him to a doctor who had agreed to take a look at David’s eyes. After examining him, the doctor offered to operate to restore David’s sight, for free! David was excited, but also in disbelief that it was even possible to have his sight back. Mary reassured him it was and that she would be there to help.  Mary was with David every step of the way, picking him up and taking him to his appointments, sitting with him in the waiting room, and waiting for him when the surgery was over. As David had not yet been connected to housing, Mary tried to convince David to spend time recovering in a respite bed, but David did not like hospitals and clinics. He wanted to be in a place that was familiar. As miserable as it was, the “swamp-hole” was that place for him. Still, Mary visited him every day to check on his recovery and help him change his bandages and take his medications. She and Katie were both there when the doctor removed the bandages and David was able to see again for the first time in years.

After having his sight back, David opened up about his desire to move on with his life and address the other issues that were keeping him from living the life he wanted. Mary was able to convince David that having an apartment would be the key to accomplishing his goals. In October, David moved into his new place in downtown Bethesda. Mary continues to visit David, helping him transition into his new life and tackle the challenges that remain.  When asked about his eyes, David jokes about now being able to see better than the doctor who performed the surgery.  Having his sight back and a home of his own has made all the difference in David’s life. He now believes that anything is possible for him and is looking, with clear eyes, to a future filled with meaning and hope.